July was a month for strengthening the mycelium!  We continued to interweave our threads through various groups and communities. Connecting with Ecovative and MyForest Foods in Green Island as well as a myriad of mushroom friends at the For the Love of Fungi Festival in Ashokan.  With the addition of Etienne and Jamie to our team, and Nico shifting his hours to focus more on grain production, we are really escalating our growth.

The JGI Media Commercials were completed. They are absolutely stunning.  Our next step is to figure out how to get these seen by a wider audience.

Swersey Silos is a state of the art indoor vertical mycelium farm constructed by MyForest foods to grow their mycelium sheets that are turned into bacon, and soon to be other products.  Our team attended the ribbon cutting and talked with some of the Ecovative and MyForest staff about how we can work together to use fungi to mycoremediate brownfield sites for the city of Troy.

For the Love of Fungi at the Ashokan Center was an all-day mushroom gathering with vendors, workshops, foraging walks, and mushroom talks. Almost all of our team attended and we had so much fun!  We lead a low tech inoculation workshop using Blue Oysters and pasteurized toilet paper.

Our book club met and discussed Mycoremediation and Mycopesticides as detailed in Paul Stamets’ book Mycelium Running.  We are looking forward to creating some experiments with his suggestions.

Assemblymember John McDonald visited the farm for a tour and discussion on how mushrooms can be used as medicine, including Psilocybin varieties.  There is a lot of interest both nationally and statewide in creating a system where Psilocybin is accessible to those in need.

Amy and Avery participated in the Thatcher Park Bio Blitz identification.  They lead a mushroom focused walk and despite the lack of rain were actually able to find quite a few different mushrooms in the forest!

Longhorn Screen and Stitch printed some T-shirts with several of our Coloring Book designs.  They came out so amazing!

Klienke’s Farm has opened back up for the season and our pre-packaged fresh mushrooms are once again in their coolers!  This quaint farm store is on Kenwood Ave near the Delmar bypass and well worth the visit!

On July 12th Collar CIty Mushrooms hosted the third meeting of the New York Psilocybin Action Committee meeting.  This will most likely be the final meeting at the farm for now as the group has outgrown the capacity of our space.  The Next meeting will be at the Sanctuary for Independent Media at 3361 6th Ave, Troy, NY 12181 from 8pm – 9pm, or on zoom at:

After the meeting we hosted a watch party of Michael Pollans’ new Netflix docuseries “How to Change Your Mind.”  Episode 1. 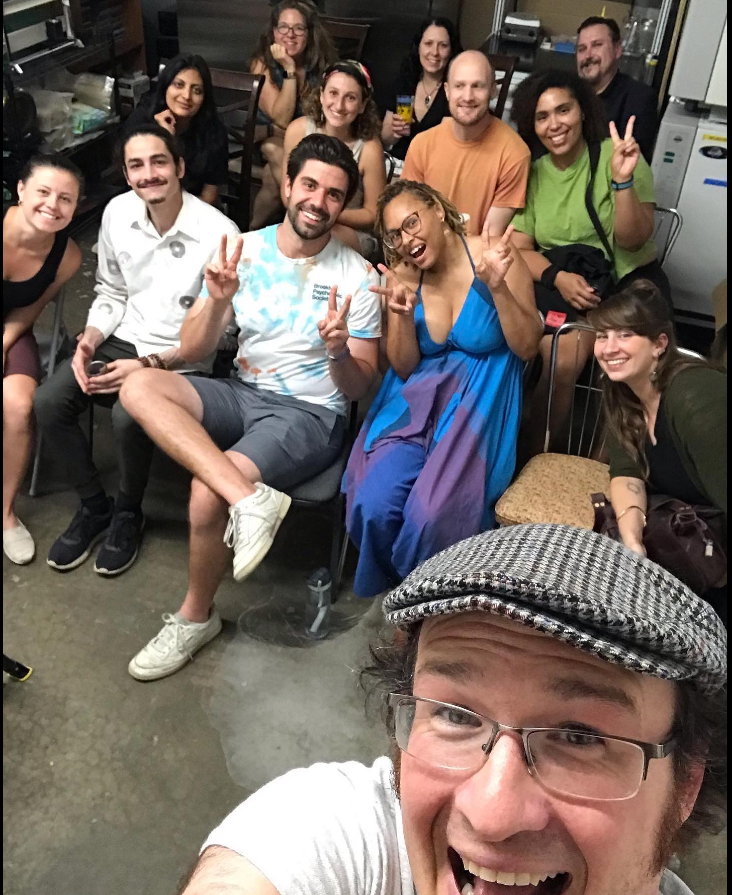 Mushroom Farmer of the Month: Bree!  Here she is harvesting some gorgeous Lion’s Mane and Pioppino Mushrooms.

Avery was interviewed by Rob Smittix from Radio Radio X about his Psilocybin Advocacy work with NYPAC.

We harvested just over 450 lbs of mushrooms in July! Our goal is 600 lbs for August.

Tuesday, August 9th, 7pm – 8pm: Meditation Amongst the Mushrooms.  A drop in meditation session for all levels.  Mushroom tea will be served.

Saturday, August, 13th 5:30pm – 8:30pm: Feast of the Fungi.  Dinner on the Farm with David Stein.  A 4 course vegetarian dinner for $60/seat. BYOB.  A mushroom-based beverage and water will be available.

Thursday, August 25th, 7pm – 8pm: Mushroom Book Club. The final session discussing Mycelium Running. We will be choosing a new book for September (most likely The Mushroom Hunters: On the Trail of an Underground America by Langdon Cook).

Tuesday, September 6th 7pm – 8pm: Meditation Amongst the Mushrooms.  A drop in meditation session for all levels.  Mushroom tea will be served.

Tuesday, September 20th, 7pm – 8pm: Meditation Amongst the Mushrooms.  A drop in meditation session for all levels.  Mushroom tea will be served.